Over at 911Blogger, Mark Graham announced on May 7th that he has set up a petition to "Revise the U.S. government final report on the collapse of Building 7" at the independent petitioning platform "Avaaz.com". This was his second attempt, a first petition had been pulled by Avaaz days earlier. This first attempt was blogged by user "kawika" on April 24th:

MILLION SIGNATURES to be sent to NIST
Wouldn't that be nice? Making this viral is no big deal.

In the thread to Mark's second petition (which, by the way, was also pulled by Avaaz, but reinstated a week later), kawika was enthusiastic on June 3rd (my bolding):

We are at 999
One more to break through the 1000 mark. Send this link to all your contacts. This will grow exponentially.

What does that mean - "grow exponentially"?

The number of signatures would double in little more than 6 days. And then double again in another 6 or 7 days. And so forth. At that rate, the petition would indeed reach 1 million after 2 months - give or take a few days (there will be some random variations from day to day of course).

The point is: "Exponential growth" means that the %-increase from day to day stays about the same, while the number of new signatures per day increases. If you draw a chart of such exponential growth of the Petition, it would look like this after three weeks: 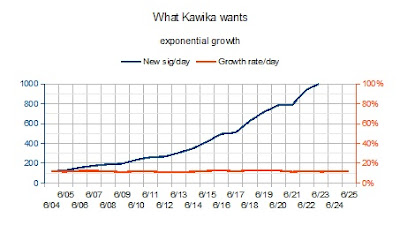 The things to look for that are typical for "exponential growth": The orange curve, which is the growth rate in %, remains about steady (the line is horizontal), while the blue line, which is the number of new signatures, increases from day to day (the line rises from left to right). If you run this for 2 months, it will look something like this: 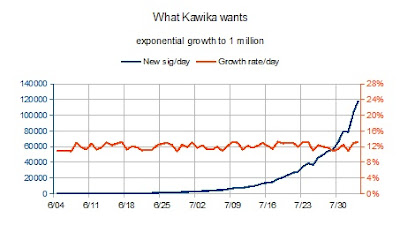 You see, the orange line remains steady, the blue line gets steeper and steeper as time goes on!

What kawika actually gets:

I have been monitoring how the petition has been developing since june 3rd. It is now past june 25th, so we have seen 21 days of new signatures. They have a total of 1,468 now. And here is the actual development: 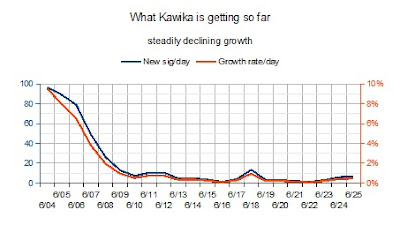 The growth rate in % (orange line) is not steady, it dropped rapidly in the first few days, almost reached 0, and has remained near 0 since. The number of new signatures per day (blue line) has declined even more, relatively speaking. It ought to be climbing! It hovered between 1 and 15 signatures per day for the last two weeks. That's background noise at Avaaz.

To compare Dream vs. Reality so far: 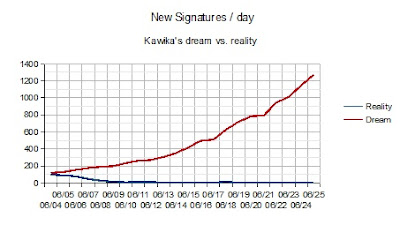 Amazing, but true: Just as the petition was trickling down to almost zero, Kawika still thought the petition had "momentum". Commenting at 911Blogger on June 11th:

LOL. Multiply they do. Unfortunately, the number of new signatures per day has been multiplying by only something like 0.75 each day.

(Update june 25th:) There has not been another comment on this failed petition since june 11th. But they set up another one on change.org ... I may blog about that at a later time.

Those truthers who expect their petitions and news and everything to go viral, grow exponentially, gain momentum, have impact, are seriously out of contact with reality. As with many of the irrelevant petitions at Avaaz and other platforms, such initiatives loose steam only days after they are first announced and spread. It appears that the Truth Movement cannot muster more than a few thousand individuals world-wide to even fill out a form on the internet.

Interestingly, this Avaaz petition has been "liked" on Facebook 580 times, twittered 75 times and forwarded by email almost 90 times, according to the Avaaz page (as of june 25th). It appears that these means of viral marketing haven't had a great impact.

I predict a continuation of this trend: Fewer and fewer new signatures every day, instead of exponential growth.

Update june 25th: I made the prediction after june 7th. It has been true on each of the three days since. Since then there have never been more than 14 signatures per day, and, on average, less than 6 per day, with small fluctuations. That's basically hugging the flat line at zero. It will struggle to reach 1500 before the end of june, and eventually fade out completely.

I won't update this blog post any longer, unless something dramatic happens.