Many 9/11 "Truthers" believe in change through popular support of their positions, and they believe they have the numbers on their side. Consequently, 9/11 Truthers have set up numerous petitions to make certain demands and points in connection with the conspiracy theorists' beliefs.

I have monitored eight "9/11 truth" petitions since the summer of 2012. The four most popular of these were started between May 2012 and March 2013. Three of them have a goal or expectation of reaching a "million" signatures, with no time frame, while the fourth is a petition to the White House and is thus expected to reach 100,000 in 30 days.

The purpose of this blog post is to visualize how terribly these "best" petitons have failed relative to their stated goals, and comment on the delusion of "truth" leaders who believe to have much popular support. Their own petitions prove them wrong.

Several websites, such as signon.org [1] , petition2congress.com [2], avaaz.org [3], change.org [4] and ipetitions.com [5] facilitate the setting-up of petitions Those petitions rarely come with a target when they are set up, but sometimes, the "truther" promoting one voices an expectation or hope about the number of signature that petition would eventually reach and surpass. As "truthers" often believe they have "millions" of supporters in the USA and the world, they usually set their hopes at "1 million" or "millions" of signatures, but without announcing a time frame to achieve that goal. To reach 1 million signatures within 1 year, they would need almost 3,000 signatures every day on average.

An exception is the White House's petition site, petitions.whitehouse.gov [6], which prescribes the target: A petiton there must reach 100,000 signatures within 30 days to be considered by the Obama administration (until recently, the threshold was 50,000).

It easy for you to verify that on all these sites petitons with success large and small have been generated en masse: While many (probably most) issues are ill promoted, unpopular, or very local in scope and attract only a handful to few hundreds of signatures, there is a good number however that surpass ten thousand, one hundred thousand, and occasionally even a million signatures. I recommend you browse the sites at your leisure. Look for "popular" or "hot" petitions. Some sites offer success stories ("victories"), where petitons not only got a lot of signatures, but their demands were also eventually met (albeit not always because of that particular petition).

With the common "truther" claim that "9/11 truth" is supported by millions, by significant proportions of the population, and with all their busy campaigning on the internet, one might expect that their issues are both well promoted and popular; and 9/11 is a national and global issue that almost everybody on the planet is aware of. As a result, their petitions should rank among the more popular. But: They don't.

"Truther" petitions and their goals

Of eight "9/11 truth" petitions that I am currently monitoring, four (by Chris Sarns, James Hufferd, an anonymous and RL McGee) have apparently never been much promoted anywhere; they have between 49 (after 32 days) and 226 supporters (after more than a year). I won't bother you with these. Their creators never announced any ambitious goal, as far as I know. The following four have fared relatively better, and at some point "truthers" voiced ambitious expectations:

The following graphs plot the development of the four petitions above. The three petitions that have been running since last summer and all want to reach 1 million are drawn to the same scale: The diagrams have the same size. The left-hand y-axis goes to the target of 1 million total signatures. The right-hand y-axis goes to the 3,000 that they'd need almost every day to reach 1 million within one year. The x-axis runs from the first day of the month the petition was started to May 1st, 2013.

The red lines shows the total number of signatures. The blue line shows new signatures per day - those are usually averages for 2 or 3 consecutive days, but intervals may vary. 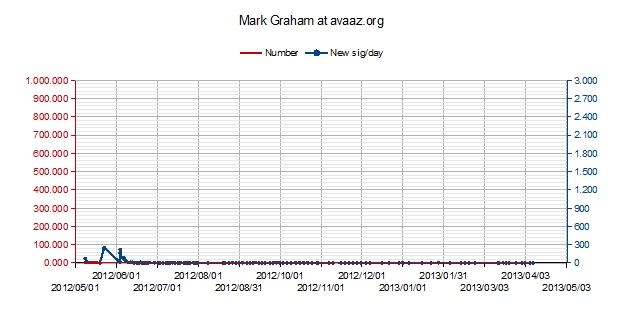 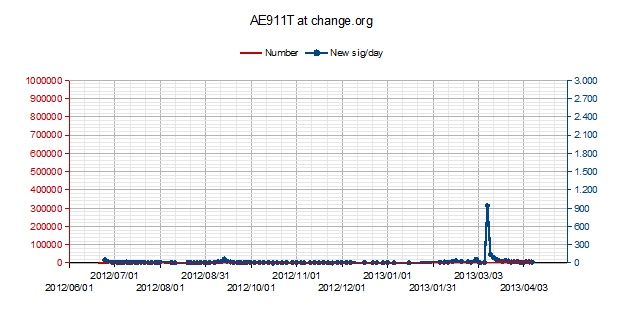 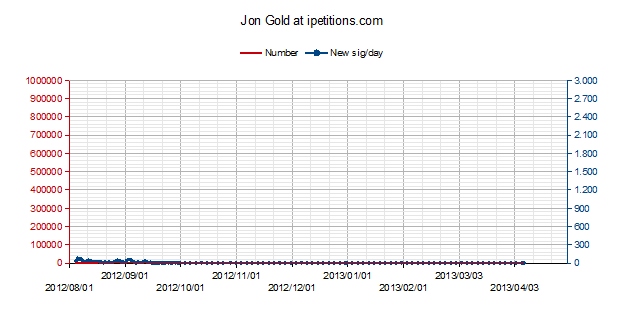 The fourth graph is scaled differently, owing to the lower target and shorter runtime. So the total is scaled to 100,000 total and 3,000 per day (it would actually take an average of 3,334 to reeach the target), the x-axis shows the 30 days available: 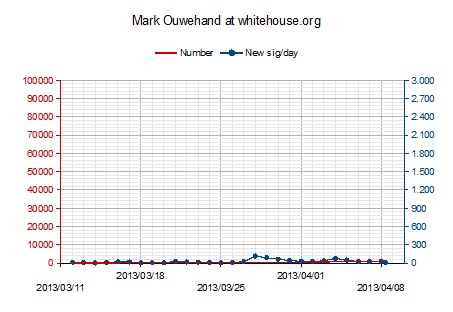 In all four graphs (my originals, anyway; not sure how you download them), the span from 0 to max y-value is 182 pixels. Since none of the four petitions has even reached 1% of its target, the red lines rise no more than 2 pixels above zero. The blue "per day" plots occasionally peak above zero, but only one of the few discernible peaks exceeds 10% of what they need every single day. All four petitions have seen activity at practically 0% of what's required on almost all days.

There are not many possibilities to explain this huge discrepancy between the stated or implied targets of 100,000, "1 million" or even "millions" of signatures and the less than 1% of that actually reached - especially the question "why do truthers voice such an expectation":

I stated earlier that many online petitions fail to win much support when they are not well promoted, or unpopular, or only interesting to a small group (local issues or special interests). The former two might apply to "9/11 Truth" petitions, so one, or both, of the following must be true:

At least in the case of Richard Gage and AE911Truth, their petition has been seen by tens of thousands, as Gage has actively mailed to their "member" base, and his website gets a lot of daily traffic (thousands of daily content views). I have no good idea how and where the other petitions have been advertized, but it seems clear that their reach has been quite limited. "9/11 Truth" is mostly known as an internet phenomenon (yeah, citation needed; please comment if you disagree!), so it should be surprising, and I'd find it rather implausible, if none of these petitions haven't been promoted such that many or most "9/11 Truth" believers could have come across them.

In my opinion, all these petitions document that, today, "9/11 Truth" is a fringe issue that no more than a few thousand individuals worldwide have an actual interest in.

I suspect that the "truth" leaders who set up such petitions are sincere in their belief that they have "millions" on their side, and that they sincerely believe to break into widespread popular support any day now, and that thus their hope to at least approach 1 million of signatures isn't far-fetched.

These "truth" leaders are deluded. They live in a tiny bubble, frequent echo chambers, where the fringe few thousands mutually amplify their delusions.

[3] AVAAZ.org. The world in action

[6] WE the PEOPLE. Your voice in our government

[13] Mark Ouwehand: REINVESTIGATE THE COLLAPSE OF WTC BUILDING 7 ON 9/11. NEVER HAS A STEEL FRAME BUILDING COLLAPSED DUE TO OFFICE FIRES. Posted on March 11, 2013

Posted by Oystein at 3:52 PM No comments: