Update July 04, 2015: The links to References [1]-[3] were broken, I updated them to new URL's. This also changes the timestamps in the video. I also re-formated the section headers and renamed the section "Footnotes" -> "References". Additional remark: I incorrectly wrote that chips a-d were the same as the four chips tested in the DSC and presented as Fig. 19 in Harrit et al. Today I know this is wrong; I keep this article as it was, regardless.

Update July 15, 2018: The links to References [2] and [3] were again broken, I updated them to new URL's. The timestamps in the video remain the same. I also moved the link to Sunstealer's post at JREF to the References as [5]

In their paper "Active Thermitic Material Discovered in Dust from the 9/11 World Trade Center Catastrophe"[1] of April 2009, the authors sought to identify the chemical nature of tiny "red-grey chips". In November 2009, one of the authors, Steven E. Jones, presented new data in Sydney, Australia[3]. This new data proves that the authors had looked at two different materials, and that one of them is primer paint from WTC steel. At the same time, it invalidates two of the main conclusions of the paper, namely Conclusion 3 ("Elemental aluminum became sufficiently concentrated to be clearly identified in the pre-ignition material") and Conclusion 6 ("From the presence of elemental aluminum and iron oxide in the red material, we conclude that it contains the ingredients of thermite."), as well as the main conclusion ("we conclude that the red layer of the red/gray chips we have discovered in the WTC dust is active, unreacted thermitic material...")

In their paper, the authors of [1] looked specifically at five reddish dust chips:

While it bears noticing that the photos of samples a-d versus MEK sample show only superficial similarity (the MEK sample is about 4 times thicker, with no apparent grey layer, and looks less uniform; they all just happen to be reddish), a very stark difference shows in the XEDS spectra: 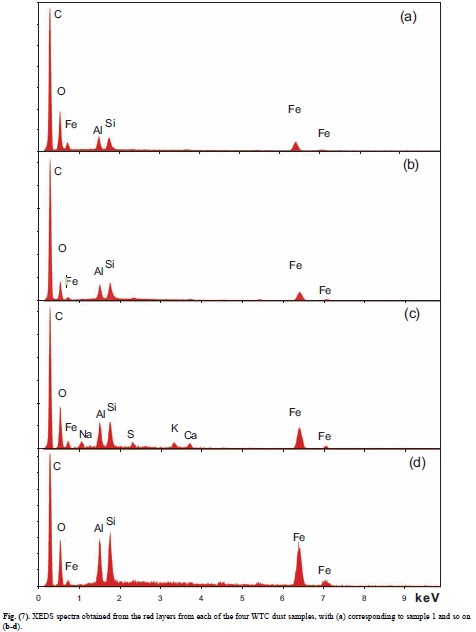 Fig. A: XEDS spectra from red layers of samples a-d 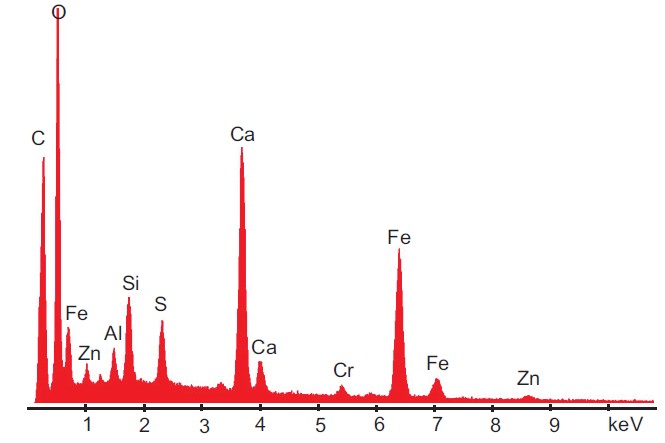 Fig. B: XEDS spectrum from red layers of MEK sample

The differences are striking: While samples a-d are very similar, with noticable peaks of C, O, Al, Si and Fe (only sample c appears contaminated with traces of Na, S, Ca and K), the MEK sample is dominated by O and Ca, has a higher peak for S than for Al, and also features Zn and Cr, two elements seen in none of the four other samples. Notice that there is a small peak at about 1.2keV, that isn't labelled, and two others at about 3.35keV and 5.9keV.

Is it possible to find a better explanation for the presence of the other elements, and identify the material of the MEK sample? Yes, it is, and the data comes from co-author Steven E. Jones, who delivered a presentation about 9/11 on November 14, 2009, in Sydney, Australia. This presentation is available on Youtube[2]. Jones presents data obtained from primer paint that was scratched off of a piece of structural steel from the World Trade Center (possibly 55th floor of the South Tower)[3]. Here is a screenshot from 35min:36sec of that Youtube presentation: 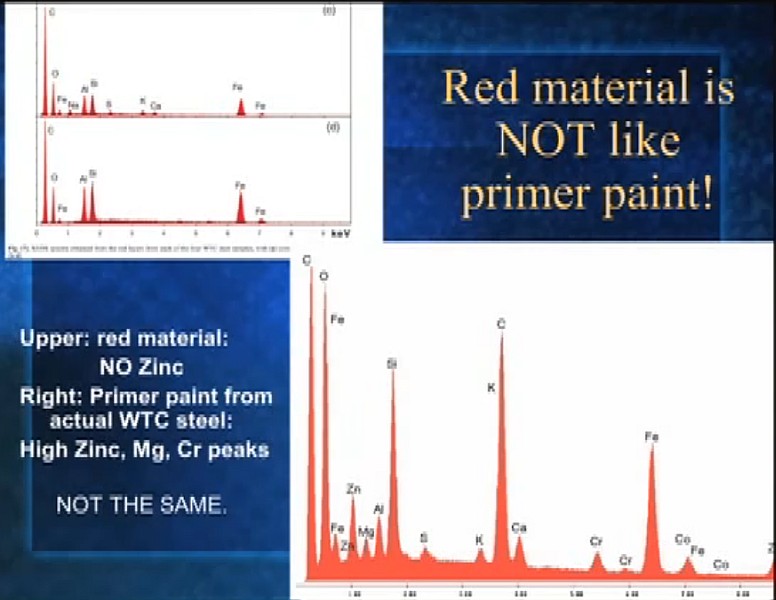 Fig. C: Screenshot from Jones-presentation in Sydney. On the left: samples c and d from [1]; on the right: XEDS spectrum of WTC steel primer paint

Jones notices, correctly, that these spectra are of different materials. However, he fails to notice that the spectrum on the right is very similar to the spectrum in Fig. 14 of [1]: The MEK sample! A comparison of these two spectra shows, from left to right:

These similarities are so striking, that we may conclude: The MEK sample was primer paint from WTC, while samples a-d were not It bears repeating that Harrit e.al. [1] provide no evidence for elemental Al in samples a-d, as they separated Al in a different material, namely primer paint, without noticing it.

The conclusions of Harrit e.al. (red layer being unreacted thermitic material) hinge on the alleged observation that the red material found in the dust
a) is always the same
b) contains Fe2O3
c) contains elemental Al
d) burns vigorously

We have to reject the main conclusions of Harrit e.al.: They have not shown that the red-grey chips contain unreacted thermite. In fact, they have failed to identify the composition and nature of samples a-d. However, we now know that the MEK sample is simply primer paint.

Jones goes on in his talk to commit a major blunder: At 37:30 in the video [3] he presents this slide, which claims that the MEK chip contains no Zinc. This is directly refuted by Harrit e.al.[1], Figure 14, which shows two XEDS peaks for Zinc, at 1.02 and 8.64keV! 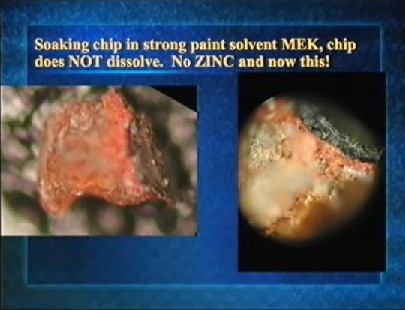 [4] Energy values for all elements can be checked at http://csrri.iit.edu/periodic-table.html. There is the K-alpha value of 3.69 for Ca, but none in that vicinity for C.